News from the Off-Season: some conference cogitations

Posted: February 4, 2015 | Author: Allana | Filed under: ALA, Discussion, News, Professional Associations | Tags: ALA, Canada, OLA |Comments Off on News from the Off-Season: some conference cogitations

I’ve just gotten back to work after a five-day weekend. Three of those days were spent at the Ontario Library Association Super Conference, here in Toronto, so, not exactly a vacation, but definitely a change from the 9-5.

Besides a ton of useful tech sessions (including on OpenRefine for data cleaning, Koha [an open-source cataloguing system], and a review of the Google Art Project by some local ARLIS/NA student chapter members), this conference is basically the Canadian answer to ALA and draws 5,000 registrants.

Speaking of, ALA Midwinter happened this past weekend as well, with roughly the same numbers flocking to Chicago. They had Jason Segel as a keynote speaker, while we had Welcome to Night Vale. It’s a toss-up, really.

ALA, of course, being that body that accredits those programs we’re taking, has measurably more weight in the profession. They’re neck-deep in campaigns for governing positions, including someone that champions lowering the admission rates to MLIS/MI programs to compensate for the underemployment problem, and someone who thinks librarians are “the best profession in the world.” Sigh. (You can see the debate recording here.) If you’re an ALA member, I strongly suggest you vote in the elections.

A hot topic in both conferences was the new information literacy standards being passed by the ACRL — or, rather, the Framework, as the new concepts are being billed. I did some ranting about this subject a while ago, but I’ll remind you that the ACRL Visual Literacy Standards from 2011 were built upon those original IL standards, which means we should expect a VL-specific interpretation of the Framework in the near future. I have been trying to mull over what those will entail, but, it’s been a busy winter so far. I’d love to hear about your ideas, in the comments! (My first guess is going to be a threshold concept of “the realization that you’re committing copyright infringement basically every time you go online.”)

Meanwhile, back in Toronto, I was finding that quite a few of the conference sessions I attended were hard-pressed to name an audience: a curious newbie, or a field specialist? Even sessions with “current trends” in the titles spent the majority of their time rehashing the basics. I definitely valued the technology demonstrations, and the guides to cataloguing in certain metadata schemes, but I think I’m too niche in my interests to find the bulk of presentations at big library conferences to be worthwhile. And some of the most interesting sessions happened concurrently, so I couldn’t sit in on the session on 3D printing and copyright without missing that Google Art Project discussion down the hall.

But on the upside, I got these awesome socks: 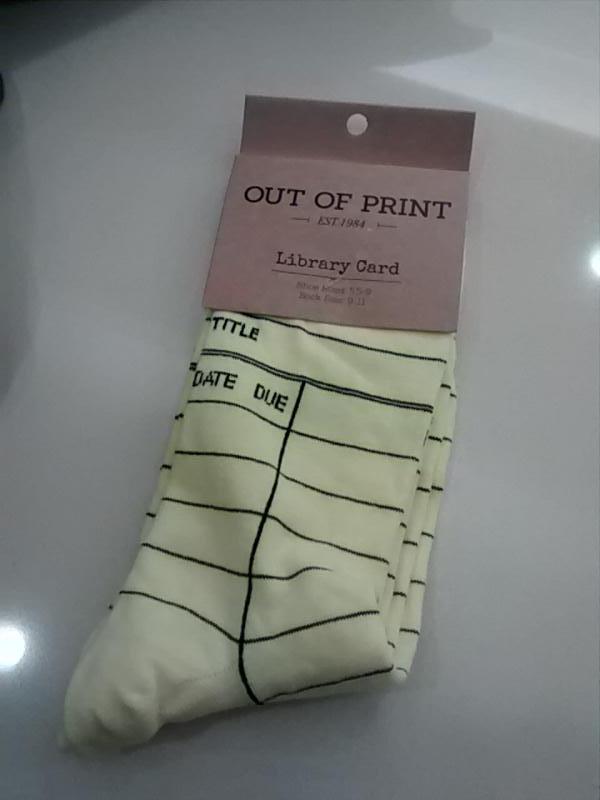 “Due Date Card” Library Socks from Out of Print

ArLiSNAP's mission is to provide an open forum for sharing ideas, scholarships, and opportunities pertinent to art librarianship. By doing so, participants will capitalize on the shared experiences and knowledge of the art library community. Furthermore, this group will provide a safe haven for art library students and new professionals by fostering exploration in a supportive atmosphere. For more information, please click on the "About" tab above!

Sign up here for a weekly digest of our posts, with extra ARLIS news from around the world.

Want to join the ArLiSNAP team? See the latest openings here, and contact Rachel or Tiffany to indicate your interest!